ARTICLE: Who keeps the plans for our power stations?

Billions of years ago, a single-celled organism that would become our ancestor engulfed another smaller single-celled organism. The engulfed cell was probably intended to be lunch, but for reasons that remain mysterious (though recently explored here), it remained intact within our ancestor. It produced valuable chemicals that our ancestor could make use of, and was protected within the larger cell. This started a mutually beneficial relationship that evolved over billions of years to give rise to our situation today -- we are the descendants of the big cell, and our mitochondria are the descendants of the small, engulfed cell.

As they were once independent organisms, mitochondria possess their own genomes (mitochondrial DNA, or mtDNA, which we've written about before). However, unlike the genomes of independent single-celled organisms like bacteria, mtDNA has only a handful of genes: why? Over evolutionary time, the majority of genes have either vanished from mtDNA or been transferred to the nucleus of the host cell. The reasons for transferring these genes to the nucleus are quite well understood; the nucleus is a safer environment for genes, less prone to mutation, and has several other evolutionary advantages.  But, given that transfer to the nucleus is possible, and genes in mtDNA are susceptible to mutation and damage (often giving rise to devastating diseases, which we study and try to prevent), why have mitochondria retained any genes at all?

This question has been asked for decades, but until recently we lacked the data and the mathematical language to answer it quantitatively. Scientists energetically debate several different hypotheses: our approach attempts to let the data speak for itself without any preconceived ideas about which hypotheses are most likely. To this end, we built a mathematical model encompassing the evolutionary history of organisms with mitochondria, and a powerful statistical framework to amalgamate all the data that has been collected in recent years -- thousands of mitochondrial genomes from organisms from plants to protists (and humans) -- and harness it to compare the many disputed hypotheses addressing this question. 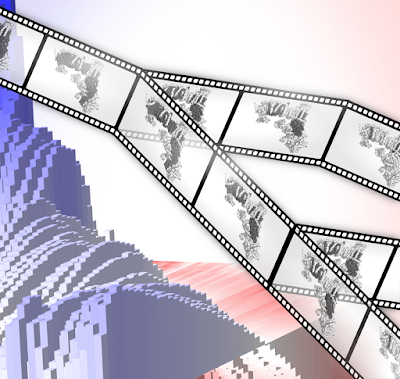 Our mathematical approach allows us to "rewind the tape of evolution" and explore how mitochondrial genes have evolved. We're looking at Complex I -- an important protein complex involved in respiration -- over time, and watching the number of its subunits encoded in mitochondrial DNA (coloured black) decrease over evolutionary time, according to rules which we identify. The skyscrapers in the background are part of a graph describing how more mtDNA genes are lost over evolutionary history.

In a new paper in Cell Systems here (free here) we found several features that are most related to whether a gene is retained in mtDNA. Before discussing what they were, note that this picture -- several different features each with some influence -- explains and justifies the existing scientific debate. If hypothesis X and hypothesis Y both represent parts of the underlying "truth", then scientists advocating X alone and scientists advocating Y alone are neither completely wrong nor necessarily at odds -- everyone's partly right and the truth lies in the combination of the two arguments.

The features that predict mtDNA gene retention are how central a gene's product is in its protein complex, the hydrophobicity of the protein the gene encodes, and the proportion of G's and C's in the gene's sequence. This suggests that genes are retained in mtDNA:
(a) To allow local control of mitochondrial machinery (individual mitochondria can be controlled in response to cellular demands, rather than having to apply changes to the entire cellular population of mitochondria at once).
(b) To prevent hydrophobic proteins ending up in the wrong place in the cell (if encoded by the far-away nucleus, these proteins may not be able to reach or enter the mitochondrion).
(c and most speculatively) Because they are capable of withstanding the damaging environment of the mitochondria (GC-rich DNA and RNA is chemically more robust than GC-poor molecules).

We found that the combination of the features we identified also predicted the success of experiments where scientists have attempted to mimic evolution and artificially transfer genes from the mitochondrion to the nucleus. Our results, as well as addressing a central mystery of evolutionary biology, thus also have the potential to inform synthetic biology approaches to tailor the genetics and bioenergetics of organisms. One final but important point is that the mathematical and statistical machinery we built for this project is highly generalisable and an efficient way of harnessing large sets of data about evolutionary and progressive processes -- we hope to use it to explore lots of other questions, including figuring out the pathways of disease progression and suggesting personalised medicine strategies in the clinic. Iain and Ben
Posted by Iain at 12:32