Evolutionary dynamics in a simple model of self-assembly

Lots of vital structures in biology must build themselves in the chaotic, frantic environment of our cells. Proteins -- machines in our cells that perform all sorts of tasks, from building cell scaffolding to assisting chemical reactions and moving electric charges -- are no exception. Many proteins self-assemble in cells, with different subunits coming together and sticking to each other to form a functioning product. The precision with which this assembly occurs "automatically" has been metaphorically described as a hurricane blowing through a pile of Lego and a fully-formed Lego train forming.

Proteins are complicated structures that have evolved over billions of years. To understand how evolution has "learned" the interactions between subunits that proteins need to successfully self-assemble, we need to work with a model system that includes the scientifically interesting details but is simple enough to investigate on paper or with a computer.

In a paper (here in Physical Review E; free here), we work with "polyominoes" as a model for evolving self-assembling systems. Polyominoes are shapes made up of connected square tiles (dominoes are polyominoes containing two tiles; the "tetromino" pieces in Tetris -- from which the game gets its name -- are polyominoes containing four tiles). In our model, these tiles have sticky edges, with some edges sticking to some others -- a list of numbers describes who sticks to whom. If we put tiles in a bag and shake them, some edges will stick, and a polyomino will form. We thus have the essential features of a random cell (the bag) and interactions between subunits (sticky edges) which are encoded by a genome (the list of numbers). 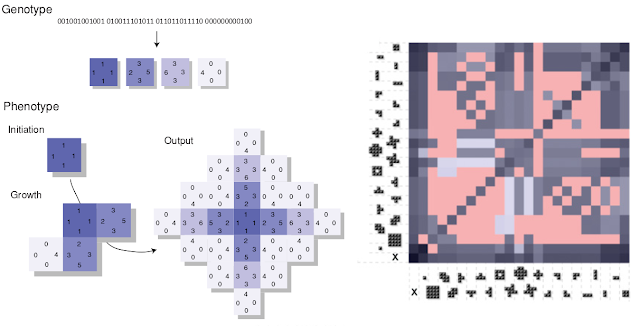 (left) The polyomino model. A "genome" (list of numbers) describes a set of square tiles with patchy edges. Some patches stick to each other -- in this case, 1 sticks to 2, 3 sticks to 4, and so on (0 sticks to nothing). Then, if the tiles are allowed to mix and meet, these sticky patches meet and form a larger structure. (right) The range of structures (axes) that can be built using two tile types, and the ways that evolution, acting on the model genomes, can change between output structures through single mutations (pink -- no link; darker -- more possible transitions).

We then simulated evolution in a computer, with random mutations changing the "genome" and natural selection acting on the resulting polyominoes. We show how different mutation rates, population sizes, and reproductive strategies affect the evolution of model biological structures. We also show that this evolutionary model can explain the symmetries of protein structures observed in biology. We explore the surprisingly rich set of structures that the model can produce, and the different modes of evolution that can lead from simple to complex forms -- helping us understand how important structures have evolved and may go wrong through mutation. There's more work on this here and an associated interactive simulation tool here! Iain
Posted by Unknown at 07:35