Mitochondrial Variability as a Source of Extrinsic Cellular Noise

Mitochondria are the tiny engines of eukaryotic cells (the cells of animals, plants and fungi) -- responsible for producing the energy vital for fundamental processes of life. A recent explosion of experimental results has shown that their behaviour is far more dynamic and rich than any man-made engine. They move through cells, fuse into large networks, break apart, replicate and get degraded if they don't perform adequately.

Mitochondrial populations are also observed to differ significantly between otherwise similar cells: one cell may possess many efficient engines, while another must make do with a small number of inefficient ones (see the blog entry here). As well as explaining why the error-bars in biology can be so big, this cell-to-cell variability in mitochondria can lead to profound medical consequences: many diseases are known to result from low quality mitochondria, unable to produce enough energy for a cell to remain healthy. Mitochondria (and mechanisms to keep their quality high) have been implicated in ageing and diseases like Parkinson's, Alzheimer's, diabetes and cancer. 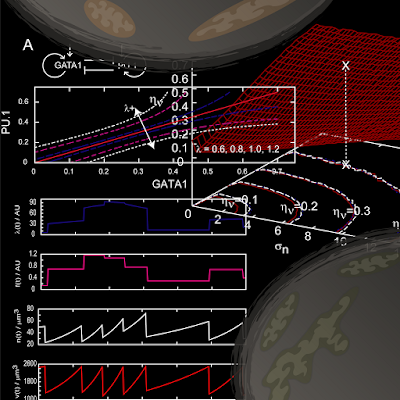 A montage of some of the mathematical analysis in our article. We're seeing the contributions of mitochondrial variability to (top) stem cell behaviour; (right) transcription rate; (bottom) cell cycle progression and physiology.

We have recently produced a mathematical model (coupled to some new experimental data) to give an explanation as to how experimentally observed variability in mitochondrial populations arises and explore its potential consequences: ranging from differences in the rate at which fundamental biochemical elements like mRNAs and proteins are produced, to differences in the stability and ultimate fate of stem cells. Our model is physically simple (we suggest several future experimental directions which would help in further development) and can mathematically be combined with other descriptions of cellular processes, providing a general framework to investigate the biologically and medically important effects of mitochondrial variability. It appeared in PLoS Computational Biology (an open-access journal) here but you can also find it here. Iain and Nick [blog post also here].
Posted by Unknown at 06:16