ARTICLE: Inferring the evolutionary history of photosynthesis : C 4 yourself


Biological evolution is a complex, stochastic process which dictates fundamental properties of life. Our understanding of evolutionary history is severely limited by the sparsity of the fossil record: we only have a handful of fossilised snapshots to infer how evolution may have progressed throughout the history of life. Many physicists and mathematicians have attempted theoretical treatments of the process of evolution, using varying degrees of abstraction, in order to provide a more solid quantitative foundation with which to study this complex and important phenomenon, but the predictive power of these theoretical models, and their ability to answer specific biological questions, is often questioned.

We recently focussed on one remarkable product of evolution in plants: so-called "C4 photosynthesis". C4 consists of a complex set of changes to the genetic and physiological features which have evolved in some plants and act to increase the efficiency of photosynthesis. This complex set of changes has evolved over 60 times convergently: that is, plants from many different lineages independently "discover" C4 photosynthesis through evolution. We were interested in the evolutionary history of how these discoveries occurred -- both motivated by fundamental biology and the possibility of "learning from evolution" and using information about the evolution of C4 to design more efficient crop plants. 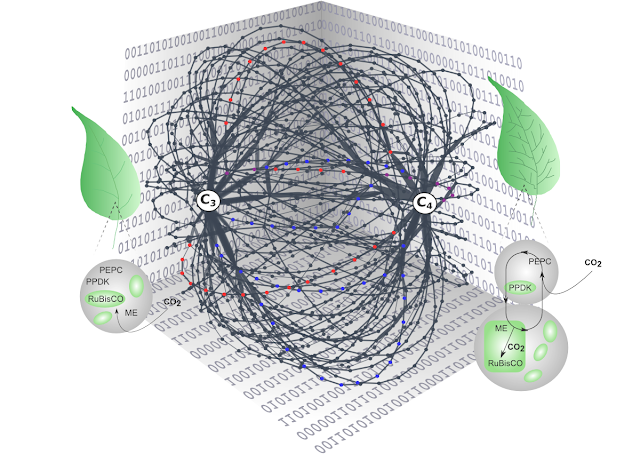 C3 and C4 plants differ in several physical and genetic ways (leaves and cells either side). We picture evolution as progressing along paths over a hypercube connecting these states (grey lines) -- some paths will give rise to intermediate species matching those we really observe (red and blue points). We can calculate how likely each path is and thus reconstruct evolutionary history.

To this end, we modelled the evolution of C4 as a pathway through a space containing many different possible plant features. The pathway starts at C3 -- the precursor to C4 -- and progressively takes steps in different directions, acquiring one-by-one the features that sum up to C4 photosynthesis. Using a survey of plant properties from across the wide scientific literature, we identified which intermediate states these pathways were likely to pass through, given observed properties of plants that currently possess some, but not all, C4 features. We were then able to use a new inference technique to predict the ordering in which these likely pathways traverse the evolutionary space. We showed that this approach worked by both successfully inferring the known evolutionary steps in synthetic datasets and correctly predicting previously unknown properties of several plants, which we verified experimentally. Our (open access) paper is here and there's a less technical summary and commentary here. Our approach showed that C4 photosynthesis can evolve through a range of distinct evolutionary pathways, providing a potential explanation for its striking convergence. Several of these different pathways were made explicitly visible when we examined the inferred evolutionary histories of different plant lineages -- different families are likely to have converged on C4 through different evolutionary routes. Furthermore, the most likely initial steps towards C4 photosynthesis are surprisingly not directly related to photosynthesis, being solutions to different biological challenges, but also providing evolutionary "foundations" upon which the machinery of C4 can evolve further. We hope that the recipes for C4 photosynthesis that we have inferred find use in efficient crop design, and anticipate our inference procedure being of use in the study of other specific biological questions regarding evolutionary histories. Iain [blog article also here]
Posted by Unknown at 07:26