ARTICLE: The inheritance of mtDNA

Mitochondrial DNA (mtDNA) is inherited from mothers to children. If two or more types of mtDNA exist in a cell, the cell is called "heteroplasmic". Mothers may carry a heteroplasmic mixture of different mtDNA types in each of their oocytes (egg cells), so a mixture of different types may be passed on to children. Different oocytes may have different mixtures -- for example, one cel may have 50% type A and 50% type B, and another may have 70% A and 30% B.

The inheritance of heteroplasmy depends both on a complicated "bottleneck" (see here and here) and whether either type has some advantage over the other -- a question that is hotly debated. The mechanisms that shape the inheritance of mtDNA populations remain poorly understood, so it's hard to predict which offspring will inherit which mixture. It's often the case that a disease is caused by a particular mixture -- for example, over 60% of type B -- so this complex inheritance makes it hard to plan fertility treatments too.

In a new paper in Cell Metabolism, we looked at the inheritance and consequences of heteroplasmy in mice. Strikingly, we found that the presence of any heteroplasmy has generally negative consequences for the cell. This is perhaps surprising, given the above view that we normally need a certain amount of a dangerous mtDNA type to cause disease. But it does match a prediction that we recently made by mathematically considering how a cell must invest energy in controlling mixed mtDNA populations. Correspondingly, we found that regardless of how much type A and type B there is, having a heteroplasmic mixture challenges metabolism in the embryo, and affects how readily induced pluripotent stem cells (iPSCs) can be produced from cells.

Given that heteroplasmy is a challenge, it seems that cells have evolved mechanisms to sense and address the inheritance of heteroplasmy. In addition to the bottleneck, we found (as in our previous work) that cell-to-cell variance of heteroplasmy increased in oocytes with age -- which will have the eventual effect of reducing heteroplasmy. We also found that particular mtDNA types had a selective advantage through inheritance, and identified a set of genes that shape this advantage. Variability in the expression of these genes, and variability in metabolic factors, led to differences in the strength of selection. 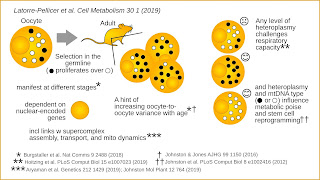 Some key findings from this paper, and links to our previous work.

This work was exciting because it provided some insights into the mechanisms that shape mtDNA populations between generations -- but also because it validated several predictions that our theoretical work had proposed in the past:


We're continuing this exciting collaboration and looking in more depth at the behaviour of mtDNA over time.
Posted by Iain at 02:33