Mitochondrial heterogeneity, metabolic scaling and cell death
J Aryaman, H Hoitzing, JP Burgstaller, IG Johnston, NS Jones
BioEssays e201700001; doi:10.1002/bies.201700001 (2017)
Cells need energy to produce functional machinery, deal with challenges, and continue to grow and divide -- these activities and others are collectively referred to as "cell physiology". Mitochondria are the dominant energy sources in most of our cells, so we'd expect a strong link between how well mitochondria perform and cell physiology. Indeed, when mitochondrial energy production is compromised, deadly diseases can result -- as we've written about before.

We were interested in the mitopeak, and wondered if scientifically simpler hypotheses could account for it. Using mathematical modelling, our idea was to use the observation that as a cell becomes larger in volume, the size of its mitochondrial population (and hence power supply) increases in concert. We considered that a cell has power demands which also track its volume, as well as demands which are proportional to surface area and power demands which do not depend on cell size at all (such as the energetic cost of replicating the genome at cell division, since the size of a cell's genome does not depend on how big the cell is). Assuming that power supply = demand in a cell, then bigger cells may more easily satisfy e.g. the constant power demands. This is because the number of mitochondria increases with cell volume yet the constant demands remain the same regardless of cell size. In other words, if a cell has more mitochondria as it gets larger, then each mitochondrion has to work less hard to satisfy power demand.

To explain why the smallest cells also have mitochondria which do not appear to work hard, we suggested that some smaller cells could be in the process of dying. If smaller cells are more likely to die, and if dying cells have low mitochondrial functionality (both of these ideas are biologically supported), then, by combining this with the power supply/demand picture above, the observed mitopeak naturally emerges from our mathematical model.

As an alternative model, we also suggested that the mitopeak could come entirely from a nonlinear relationship between cell size and cell death, with mitochondrial functionality as a passive indicator of how healthy a cell is. This indicates the existence of multiple hypotheses which could explain this new dataset. 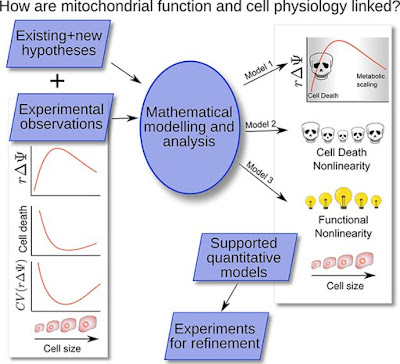 Interestingly, we also found that the mitopeak could be an alternative to one aspect of a model we used some time ago to explain a different dataset, looking at the physiological influence of mitochondrial variability. Then, we modelled the activity of mitochondria as a quantity that is inherited identically by each daughter cell from its parent, plus some noise -- noting that this was a guess at the true behaviour because we didn't have the data to make a firm statement. We needed this relationship because observed functionality varied comparatively little between sister cells but substantially across a population. The mitopeak induces this variability without needing random inheritance of functionality, and may thus be the refined picture we've been looking for. These ideas, and suggestions for future strategies to explore the link between mitochondria and cell physiology in more detail, are in our new BioEssays article here. Juvid, Nick, and Iain.
Posted by Iain at 10:42